40 tips to get you through the season’s hurdles


1. Cooking for a small crowd? Serve a turkey breast (no skin), which has 60 fewer calories per 3.5-ounce portion than dark meat. It also cooks in less time than a whole bird.


2. Keep Chestnuts on hand. They have less fat and about half the calories of regular nuts.


3. Season strategically. Flavors like cinnamon, cloves, ginger and nutmeg capture the essence of the season without adding many calories. Replace salt with savory basil, garlic, rosemary, sage, thyme or turmeric in casseroles, stuffings and dressings. 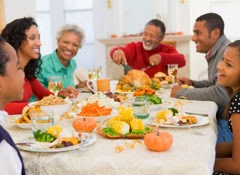 4. Make a healthier mash. Reduced-fat or no-fat versions of Greek yogurt taste rich and creamy and can be folded into mashed potatoes in place of butter or sour cream.


5. Bake with pureed fruit. It can replace up to 25 percent of the butter or oil in backing, cutting down on fat and calories.  For instance, try applesauce in muffins or brownies.


6. Prepare poultry safely. Buy a fresh bird one or two days before you plan to cook it. For a frozen turkey, allow 24 hours of thawing in the refrigerator for every 4 to 5 pounds. For safe cooking instructions, go to fsis.usda.gov and search for “Let’s Talk Turkey.”


7. For appetizers, think fresh. Boiled shrimp with lemon or cocktail sauce is a smarter pick than fried hors d’oeuvres. Other healthful starters include stuffed mushrooms, sliced low-fat cheese, and raw veggies with hummus.

8. Don’t fast before dinner. It will probably lead to overeating. Instead, grab some small, low-calorie snacks beforehand.


9. Avoid a deadly dinner. A study of heart-attack patients suggested that an unusually large meal—packed with carbohydrates, fat, and salt—quadrupled the chance of having a heart attack within the next two hours.


10. Relearn buffet eating. You would not order one of everything from a menu, so scan the table and make your choices before you load up a plate.


11. Skip the whip. Whipped cream can add 100 calories or more when used as a drink or dessert topper. Try going without, or opt for a nonfat version.


12. Eat slowly. For most people, incidents of heartburn are episodic and result from eating too much too fast.


13. Just say no. Peer pressure never gets easier to handle. But if you’re being urged by a host to keep eating when you’re full, this polite but firm statement should be able to do the trick: “No thank you, I’ve had enough. Everything was delicious.”


14. Sip tea. You can cut about 3,500 calories, about the amount it takes to put on a pound, by choosing tea over soda throughout the holidays. Try drinking it without sugar or milk. And tea has health benefits, too.


15. Choose lighter-colored spirits. Dark liquors such as whiskey are more apt to cause hangovers than colorless or lighter drinks because they have more congeners, which are substances produced during fermentation that can make you feel ill.


16. Make a spritzer. Mix half red or white wine and half seltzer in a wine glass, add a slice of lime, and you have a festive drink with half the calories and alcohol content.


17. Arrive home safely. Nearly 60 percent of fatal traffic accidents are single-vehicle crashes, mostly occurring during late-night or early-morning hours. Get to a hotel if you start staring at the road or begin to nod off.


18. Don’t fall for hangover “remedies.” The purported cures sold in stores and online are useless, according to a review published in June 2010 by researchers in the Netherlands. Instead, drink moderately and not on an empty stomach. Also, alternate water with alcoholic beverages to stay hydrated. Then drink coffee to battle fatigue and take aspirin or ibuprofen.


19. Don’t burn the tree down. Christmas trees account for an average of  240 fires, 13 deaths, and nearly $17 million in property damage annually, based on data collected from 2005 to 2009. Make sure that heat sources are kept far away, and keep the holiday tree stand filled with water. 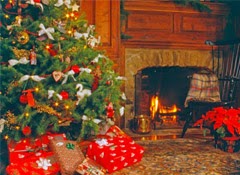 20. Watch the decorating. More than 5,000 people annually will suffer a fall while decorating for the holidays, whether from ladders, roofs, or furniture. Instead, ask for help.


22. Dust bust. Menorahs, Christmas tree ornaments, and other decorations that spend most of their year in the attic or basement can trigger allergies when taken out of storage. Clean them before you deck the halls.


23. Unwrap carefully. About 17 percent of adults will be injured or will know someone who gets hurt while opening gifts, according to a 2009 survey by the Pennsylvania Medical Society. Use a pair of scissors on stubborn plastic “clamshell” packaging or other items that you can’t open easily by hand.


24. Team up. Find family or friends to exercise with. Workout buddies will motivate you on those cold, dark mornings when staying in bed seems so much more appealing.


25. Mall walk. You can burn about 300 calories an hour while walking briskly. Take a few extra laps around the mall even after you’re done shopping.


26. Rock 'n' clean. Nobody ever said cleaning can’t be fun. It’s a great way to burn calories while whittling down your to-do list. Some fast-paced holiday tunes should get you going.


27. Bust belly fat. Even if your overall weight doesn’t change, a small study published in 2006 in the journal Nutrition & Metabolism found that people saw a shift in body-fat composition over the holidays, with more of their fat accumulating by their belly. Since abdominal fat has been linked to cardiovascular disease, type 2 diabetes, and early mortality, stay active regardless of what your scale says.


28. Don’t count on losing it later. If you need motivation not to put on weight over the holidays, consider this: Research shows that the extra pounds people gain during the season aren’t lost during the remainder of the year.
For Your Spirit


29. Forgive. Disagreements within families are normal; don’t let them ruin your holidays or your health. A positive attitude can not only help mend and preserve relationships but also improve your heart rate and blood pressure, according to research published in the Journal of Cognitive Psychotherapy.

30. Forget what you can’t afford. Research in wealthy and poor populations has shown that as long as basic needs are met, additional wealth and material objects have little effect on well-being. In fact, people who are more focused on material goods exhibit reduced life satisfaction and higher levels of depression. 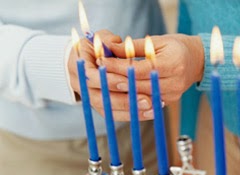 31. Worship with others. A study in the America Journal of Psychiatry concluded that observing one’s faith in a social setting was linked to a lower risk of illness, especially depression. If you don’t practice a religion, seek out community or other social events.


32. Toast those who aren’t there. Special remembrances and displays of photos can stimulate affectionate talk about people you miss, turning sadness into special moments.


33. Be merry with your mate. Couples who participate in holiday rituals together, such as decorating their home or lighting candles, can strengthen their marriages, according to Syracuse University researchers.


34. Make a New Year’s resolution. More than two-thirds of Americans don’t partake in this tradition, according to a nationally representative survey conducted by Harris Interactive. That leaves them with no urgency to make changes for the better.


35. Hydrate. Drinking plenty of water throughout the day—at least eight glasses—will keep you from eating when you’re actually thirsty.


36. Re-gift. Take food baskets or high-calorie presents you receive to work or parties so that they can be shared. 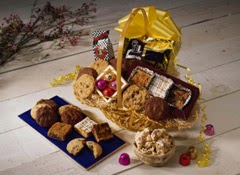 37. Keep a food diary. The more honest you are about what you eat in a day, the bigger the boost in willpower.


38. Get a history lesson. Knowing the health status of your family members, past and present, not only strengthens ties but can also build a family health history. That can help you predict your own risk of disease, and motivate you to make lifestyle changes if needed.


39. Check your doctor’s vacation schedule. Make any necessary backup plans if he or she is going to be away at the end of the year. One possible reason fatal heart attacks spike during the holidays is because people wait to go to the doctor or hospital after initial symptoms appear, possibly due to a lack of available care.


40. Remember: Life isn’t perfect. Stay calm, and enjoy your family, friends, and all the festivities.