The Wood County Committee on Aging's 700 Home Delivered Meal (HDM) clients have an  opportunity each month to join in a trivia contest sponsored by Walker Funeral Homes. This contest is included in their HDM newsletter packet and is a double-sided page of trivia. Each months  questions are based on a theme. The questions range from fill in the blanks, true and false, to multiple choice. This months theme was love. Over 58 HDM participants completed the trivia sheet and returned it to their meal delivery driver for entry into this contest. We are happy to announce the February winner is Linda Machcinski from Perrysburg, Ohio! Thank you to all of our HDM clients who participated in this contest and stimulated their minds this month. A special thank you to Walker Funeral Homes for the thoughtful basket design. We are looking forward to additional participants in March's contest.  You could be our next winner! 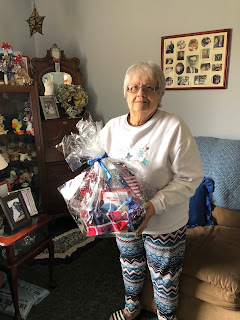 Above; Linda Machcinski, Perrysburg Ohio the winner of February's contest. The trivia sheet and answers are featured below. Let us know how many you got right! 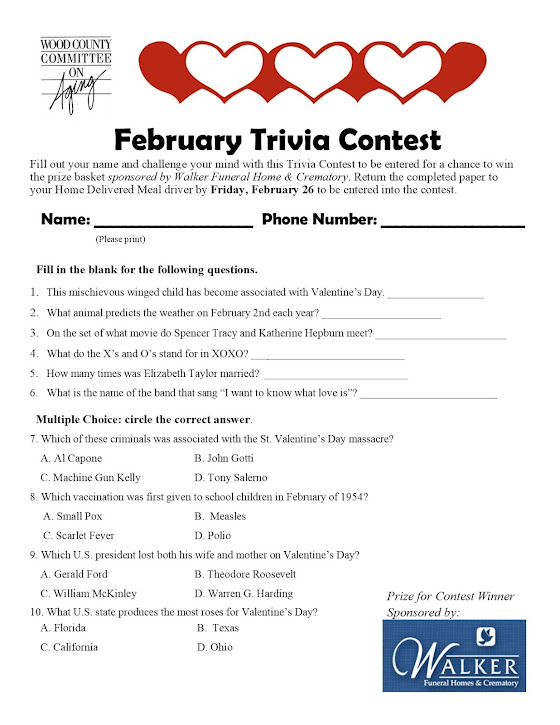 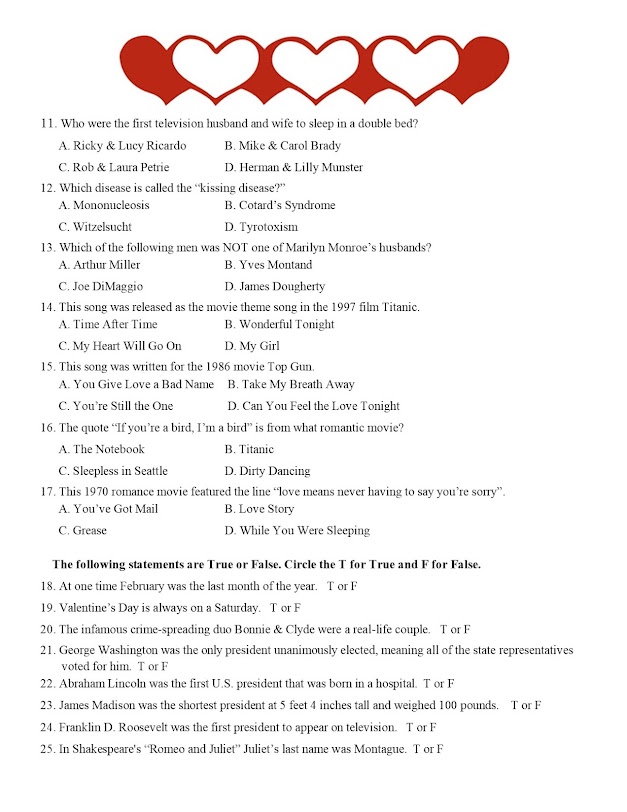 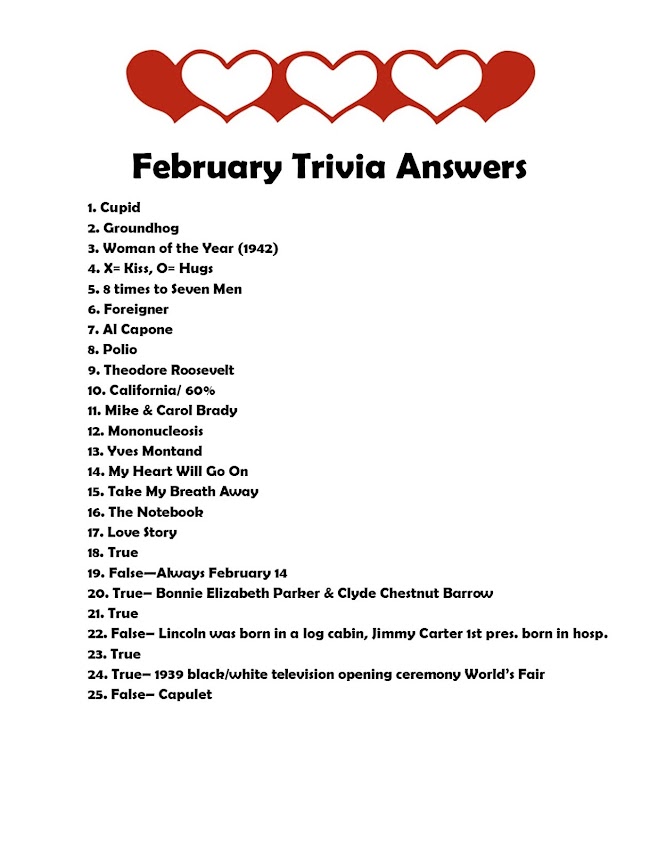 Home Delivered Meal clients received a winter trivia flyer at the beginning of January. Anyone who completed the trivia and returned it to WCCOA was entered to win a gift basket (pictured below) sponsored by Walker Family Funeral Homes & Crematory! 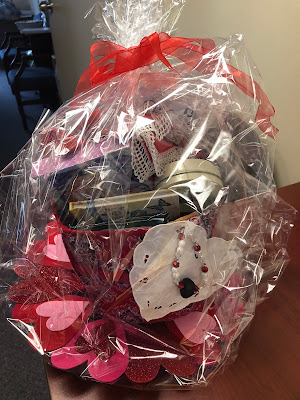 The winner of the January gift basket was Rebecca Locke-Gagnon from Perrysburg, Ohio!

2. What is the birthstone for the month of January?   Garnet

4. A person in the U.S. who moves from the north to the south during the winter is referred to as this. Snowbird

5. In what city does the New Year’s Eve ball drop every year?    New York City

6. What is the name of the traditional New Year’s Eve song?   Auld Lang Syne

7. Which of the following is NOT affected by wind chill?

8. What shape are snowflakes?

9. How much snow is equivalent to an inch of rainfall?

10. This winter sport is sometimes referred to as “the roaring game.”

11. What American holiday is celebrated on the third Monday of January?

12. In figure skating, what is the term for a jump which includes a one-half extra rotation, generally considered to be the hardest skill?

13. Which sport is the official national winter sport of Canada?

14. To be considered a blizzard, snow must be blowing at a minimum of 35 mph and have reduced visibility

15. The New Year’s tradition of eating pork & sauerkraut is supposed to do what?

16. The first Winter Olympics took place in the French Alps during what year?

17. The popular narrative poem "The Raven" was first published in January of 1845. Who is its author?

18. The tradition of a New Year’s kiss has been around since the Middle Ages.  TRUE

20. Bacon fat was used to make explosives during WWII.   TRUE

22. There is an average of 105 snow-producing storms in the United States in a typical year.  TRUE

23. The coldest continent is Antarctica.    TRUE

25. January is the overall most popular month for birthdays.  FALSE (Correct Answer: August)

In August of 2020, we started a Collaborative Story Project! Eight different stories originated from our eight senior center locations. Participants were asked to do the following:

2. Add a sentence or two to the story on the blank pages provided.

3. Mail or hand-deliver the story to a friend or family member!

We asked that the stories be returned to WCCOA around October 31, 2020 to be published here. We hope to receive our last five tales through the mail in the coming months. 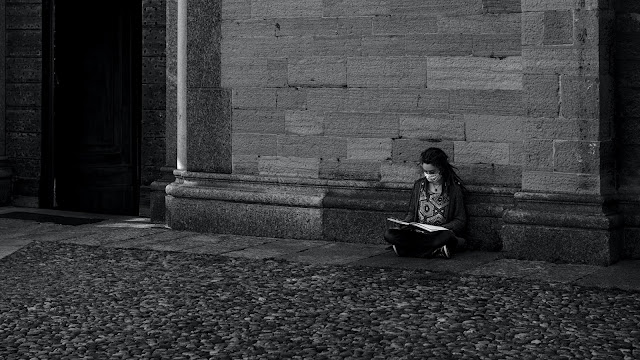 It was the middle of the summer of 2020. Each day's newspapers brought the news of the passing of one of our former friends. I drove down to Bowling Green and walked around the Wood County Fairgrounds for about twenty minutes.
This has been a very unusual season controlled by the Corona Virus curtailing of our simple pleasures. Meetings with friends and family, no church attendance or Senior Center gatherings. Even meals and gatherings with family prohibited. No shopping trips or restaurants to enjoy. But we are survivors and books came off bookshelves and TV became our daily companion. Our home became our palace. We survived!
Posted by WCCOA at 8:30 AM No comments:

In August of 2020, we started a Collaborative Story Project! Eight different stories originated from our eight senior center locations. Participants were asked to do the following:

2. Add a sentence or two to the story on the blank pages provided.

3. Mail or hand-deliver the story to a friend or family member!

We asked that the stories be returned to WCCOA around October 31, 2020 to be published here. Check back here on January 22 when the Perrysburg Area Senior Center story will be published! 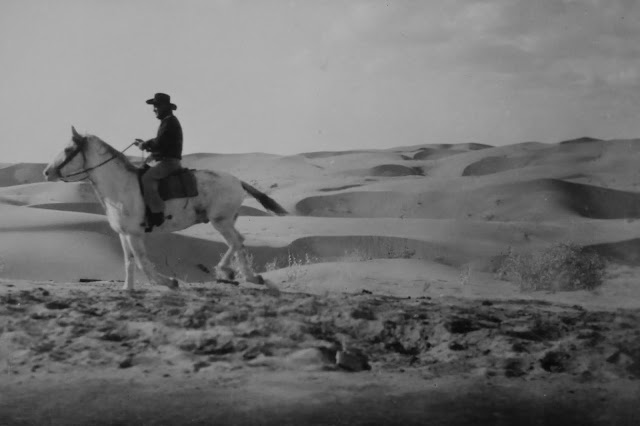 The phone did not stop ringing all day...
I found out it was the tinnitus in my ear. Whew! Glad I didn't try and answer it... so I got that straightened out.
I got calls about Medicare, electricity, computer service (I don't have a computer), lower interest on my credit card, debt forgiveness, I won 2.5 million dollars from a contest I never entered, etc. Went back to smoke signals! No more prank calls.
Seeing the smoke signals, I jumped in my saddle and rode in the other direction, heading further west to the mountains and settled into a wooded area to rest.
The Lone Ranger and Tonto came and got me. Hi-Yo Silver! We rode away.
They took me to Walmart so I could get toilet paper and puppy food. I saw a bunch of people I haven't seen in months.
It was a cold icy winter and my steps on my front porch were covered with ice. I didn't want anyone to slip on them and get hurt so I attempted to remove the ice by getting on my stomach and scraping the ice off. I slipped on each step and ended up in the hospital with a broken wrist and other damages. I only fell five more times since. I now am in my 90s and doing quite well. Thank God. Keep me in your prayers.
And then the phone rang! It was an evangelist telling me he would pray for me.
And it rang again. It seems that my car warranty has expired. So I gave my car to Kars for Kids.
Now it seems that I have won a trip and need to be at the airport PDQ. Unfortunately I'm having trouble hitchhiking with a broken wrist.
Oh wait... I think I see the Lone Ranger and Tonto. Hi-Yo Silver!!
Posted by WCCOA at 8:30 AM No comments:

Home Delivered Meal clients received a Holiday trivia flyer at the beginning of December. Anyone who completed the trivia and returned it to WCCOA was entered to win a gift basket (pictured below) sponsored by Walker Family Funeral Homes & Crematory! 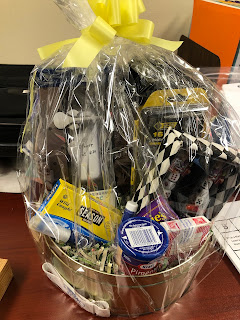 The winner of the December gift basket was George Leslie from Northwood, Ohio!

1. What is Ralphie’s little brother’s name in the movie A Christmas Story? Randy

2. What Christmas decoration was originally made from strands of silver? tinsel

3. What was Frosty the Snowman’s nose made out of?  a button

4. What beverage company has been using Santa Claus in its advertising since 1931? Coca-Cola

5. What is the number one best-selling holiday single of all time?  White Christmas

6. This Saturday Evening Post artist was known for his whimsical pictures of Santa Claus? Norman Rockwell

7. This one reindeer is never mentioned in “The Night Before Christmas”?

8. In what city did Miracle on 34th Street take place?

9. This appliance became Santa’s sleigh in this memorable commercial from the 1960’s?

12. What’s the most popular Christmas play featuring toys that come to life?

14. In the movie “A Christmas Story,” what was the name of the next door neighbors whose dogs ate the Christmas turkey?

16. Which one of the these is NOT one of Santa’s reindeer?

17. As the clock chimes midnight to ring in the New Year, a Spanish tradition involves eating twelve of  what – one for each chime?

19. A star is the most popular Christmas tree topper.  False (Correct Answer: Angel)

20. Jingle Bells was the first song ever to be played from outer space.   True

22. Candy canes were made to imitate a shepherd’s hook in honor of Jesus. True

24. The ox and lamb kept time with the Little Drummer Boy.   True